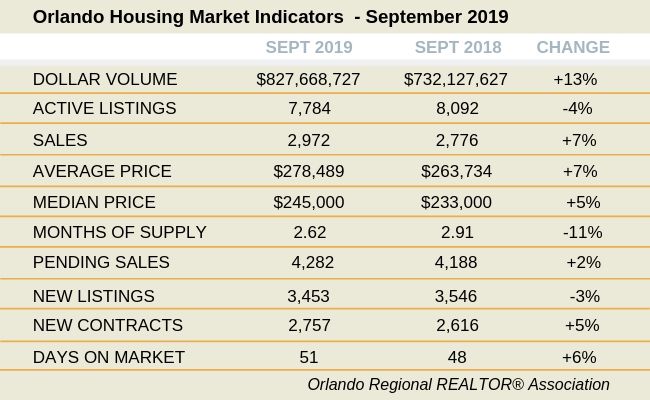 Orlando’s housing market in September recorded year-over-year increases in both sales (7%) and median price (5%). The inventory of homes available for purchase, however, saw a second consecutive decline after nine months of positive postings.

“The unexpected boost in post-summertime sales can be attributed in part to encouragement from falling interest rates,” says Orlando Regional REALTOR® Association President Jeffrey M. Fagan, Watson Realty Corp. “The average interest rate paid by Orlando homebuyers have dropped each month this year since February, and the September average rate of 3.68% is down 21% from the September 2018 average rate of 4.66 percent.”

The first-time homebuyers affordability index increased to 97.87% from to 95.33% last month.

The overall inventory of homes that were available for purchase in September (7,784) represents a decrease of 3.8% when compared to September 2018, and a 1.7% increase compared to last month. There were 5.7% fewer single-family homes and 2.1% less condos, year over year.

The average interest rate paid by Orlando homebuyers in September was 3.68%, down from 3.72% the month prior.

Sales of existing homes within the entire Orlando MSA (Lake, Orange, Osceola, and Seminole counties) in September were up by 6.8% when compared to September of 2018. To date, sales are down 3.1%.