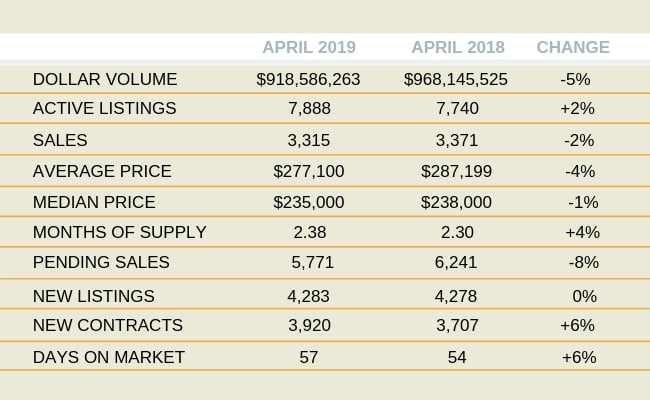 From The Orlando Regional REALTOR Association

After 93 months of consecutive year-over-year increases in median price, the Orlando housing market saw its first decline in April. The decrease was only 1% but it comes at the start of our traditional summer selling season, which typically sees jumps in both median price and sales.

According to the latest monthly report from the Orlando Regional REALTOR® Association, the median price (the figure at which half of the homes sold for more and half sold for less) was $235,000.

The report also shows 3,315 homes were sold in April compared to 3,371 for a 2% decrease. The decline can be attributed to factors such Orlando’s years of meager inventory (especially in the lower price categories) and years of steadily rising prices.

The good news is that our inventory has been experiencing small-but-consistent increases. For April, the level of available homes increased by 2%. Each month since January has seen a year-over-year rise, with January in the lead with an 8% increase.

Condos are exhibiting the largest rises in availability; there were 20% more condos available in April of this year than in April of last year.

Single-family home sales dropped 4% in April, with 2,535 units sold throughout the Orlando area versus 2,636 a year earlier. April marks the fourth consecutive month of sales declines; January saw the greatest (-14%) and February saw the smallest (-2%).

The median price for single-family homes decreased by 1% to $255,000 in April. The inventory of this home type increased a tiny fraction of less than one%. There are currently 6,193 single-family homes available for purchase through the multiple listing service.