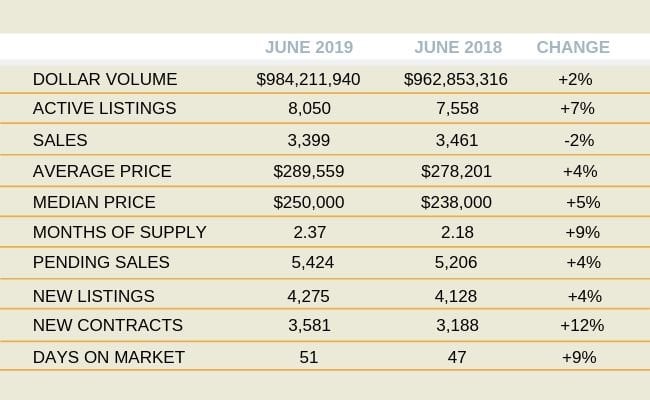 Orlando home sales took a tiny tumble in June, slipping 2% compared to June 2018 during what is traditionally near the peak of our homebuying season.

“We are expecting June’s sales decline to reverse itself in the coming months as families seek to close on their new homes before the start of the school year,” says ORRA President Jeffrey M. Fagan. “In addition, we anticipate an eagerness to take advantage of favorable conditions such as small-but-steady increases in the inventory of homes available for purchase in the Orlando area and falling mortgage rates.”

According to the latest monthly report from ORRA, Orlando area homebuyers secured an average interest rate of 3.93% in June. That’s down from 4.15% in May and a high this year in February of 4.34%.

ORRA members were involved in 3,399 property transactions during June. Sales of townhomes dropped by a whopping 22%, which was enough to drag the overall sales comparison down by 2 percent. Sales of single-family homes actually improved by about half a percent over last year, while condos rose by more than 3 percent.

Speaking of condos, this home type is leading Orlando’s eight-month string of inventory increases. The number of condos available for purchase in June expanded by 24%, to 1,135. Single-family homes had 5% more availability than in June 2018, bringing our overall inventory up by 7 percent.

Despite inventory gains, Orlando is still clearly a seller’s market as it has only 2.37 months of supply (six months is considered by economists to indicate a market that is balanced between buyers and sellers). However, the balance shifts when you consider price categories for single-family homes, with the lower price categories firmly favoring sellers and the higher price categories ($700,000 and above) favoring buyers. Those in the market for a home priced between $2 million and $5 million currently enjoy 26 months of supply. FYI, there is a 15-month supply of home priced above $5 million.

ORRA’s report also shows that the overall median price is securely back its years-long upward track. After a brief derailment into the red in April, the Orlando median price — the figure at which half of the homes sold for more and half sold for less — rose 5 percent in June to $250,000.

Single-family home sales bumped up 0.5% in June, with 2,685 units sold throughout the Orlando area versus 2,673 a year earlier. Compared to last month, single-family sales are down 11 percent.

The median price for single-family homes increased by 3% to $270,000 in June. The inventory of this home type improved by 5% over June 2018, and there are currently 6,289 single-family homes available for purchase through the multiple listing service.

Sales of existing homes within the entire Orlando MSA (Lake, Orange, Osceola, and Seminole counties) in June were down by 2.7% when compared to June of 2018. To date, sales are down 6.9%.